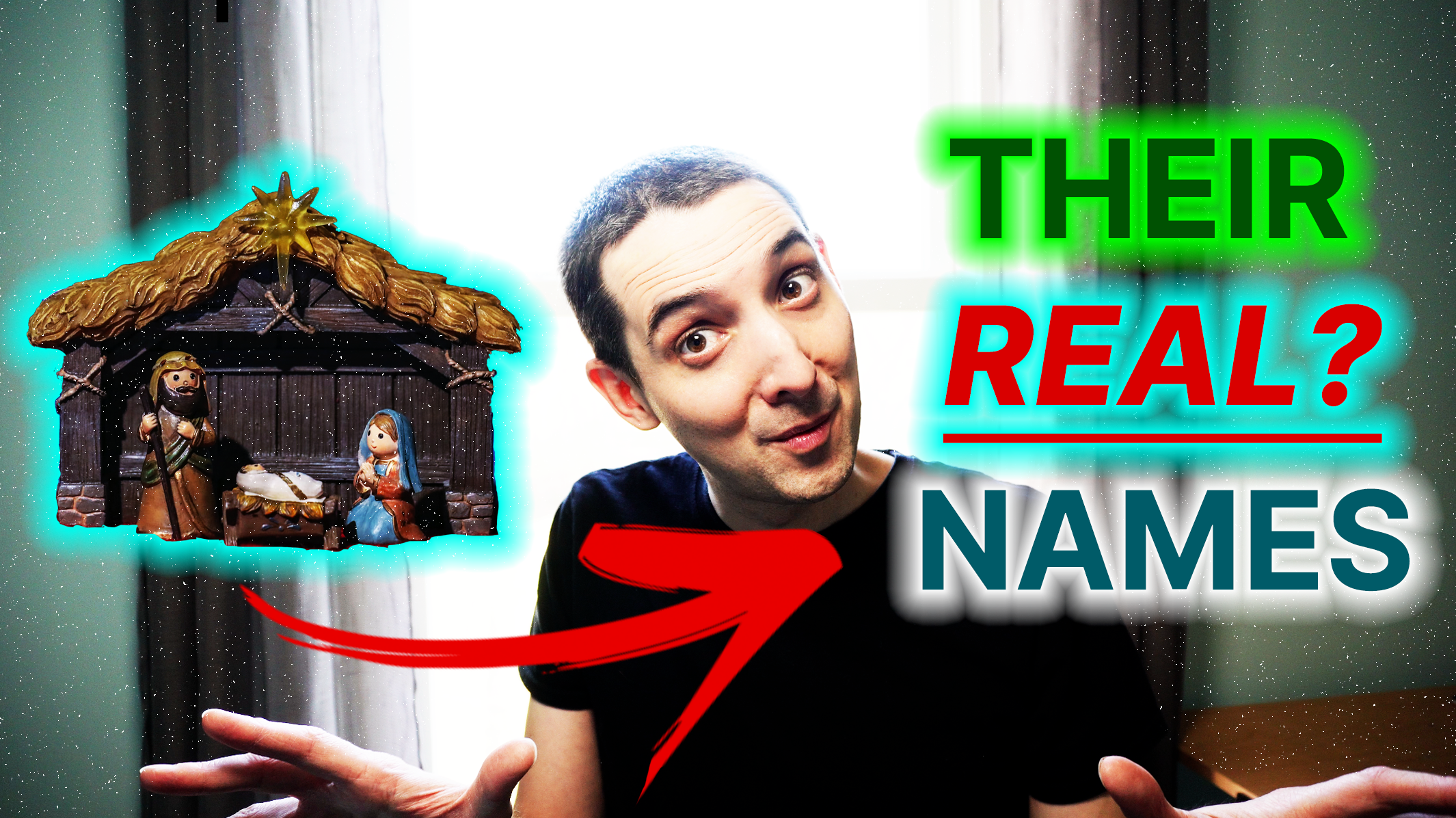 Why the Nativity is More Epic Than We’ve Been Told

It’s true. The Nativity story is more epic than many of us have been told. And three words tell the reason why: Lost In Translation.

If something of great value has been lost to the sands of time… is it too romantic to think we might recover it like some ancient buried treasure? Sure, why not? It’ll be fun!

But what exactly has been lost to the sands of time, you might ask? Why they’re biblical names, of course! (Like the thumbnail suggests ;). And with their names, a clue into their role in the overall biblical saga & just how the epic a scene Jesus being born is to the overall story it’s telling.

And with such a prize in mind, let’s go treasure hunting.

Today I’d like to share with you how the names we know the Holy family members by in the Nativity – Joseph, Mary and Jesus – might in some sense be more meaningfully translated in their Hebrew forms: Joseph, Miriam & Joshua.

But hey, what’s in name anyway? What difference does it make? Well, if you’re wondering that, here’s two reasons that it makes a big difference.

Let’s explore with each of their names more closely.

Now I know what you might be thinking: Joseph is already how the name is translated! And for that reason, maybe you’re already familiar with the three ways that Joseph’s story is reflected in Matthew’s nativity I’ll highlight here.

Those three things being that Joseph is:

But even if you’re familiar with these connections or the way this story is reflected in Matthew’s nativity, have you ever experienced the nativity story this way? Consider how it looked through the eyes of this new Jacob, who is the father of our new Joseph, the adopted father of Jesus.

When he named his son Joseph, what was he thinking? Was it in part inspired by the biblical Jacob who had a son named Joseph long before him?

and Jacob the father of Joseph the husband of Mary, of whom Jesus was born, who is called Christ.
– Matthew 1:16 ESV

I mean, almost certainly, it seems like he must have at least been thinking about it… how that famous Jacob fathered 12 sons with a Joseph as his beloved or favorite son. Might he have named his own son Joseph to express that beautiful sentiment once more?

But how surprised or in awe was this new father Jacob when his son named Joseph grew up and played a pivotal role in Israel’s story; with Joseph becoming the adopted father of the Messiah and by also doing meaningful things that revolved around divinely inspired dreams just like his namesake in the Old Testament. And finally, by saving his son from a threat of death by moving the family to Egypt as well!

How amazing would this have been from his father Jacob’s perspective?

And in this, just looking at the first name, we start to see how the nativity story in the coming of Jesus is revealed as a culmination of all that’s come before. And that pattern continues to return next to Mary and her namesake, Miriam.

Like with Joseph, let’s consider three things regarding Miriam’s time in Israel’s story, mainly regarding her brother Moses that are revisited in Matthew’s nativity.

1. Hundreds of years after Joseph moves Israel into Egypt, the growing population threatens the new Pharaoh and he starts putting to death infant Hebrew boys. Moses is born around this time and his mother sends him away in a basket on the waters to try to save him. And the scripture suggests his older sister, Miriam, is right there with them as Moses floats away.

2. As an adult, Moses’ life is again threatened when he accidentally puts to death an Egyptian. He escapes Egypt and later returns when God tells him that those seeking to punish him and take his life, have all died. In returning, he’s reunited with his people and his family, including his sister Miriam.

3. Moses leads Israel’s Exodus out of Egypt with his sister Miriam at side his in song.

Through the Exodus, God seeks to set his people free to live under his rule, reflect his nature, be his true image bearers, or to paraphrase Leviticus, “to be holy as the Lord their God is holy”. Hence the words of God in Hosea 11:1 describing the exodus…

out of Egypt, I called my son.

Reading the nativity story in Matthew, you’ll see all three of these elements from Moses’ story fulfilled with the new Miriam (or Mary) there each step of the way. 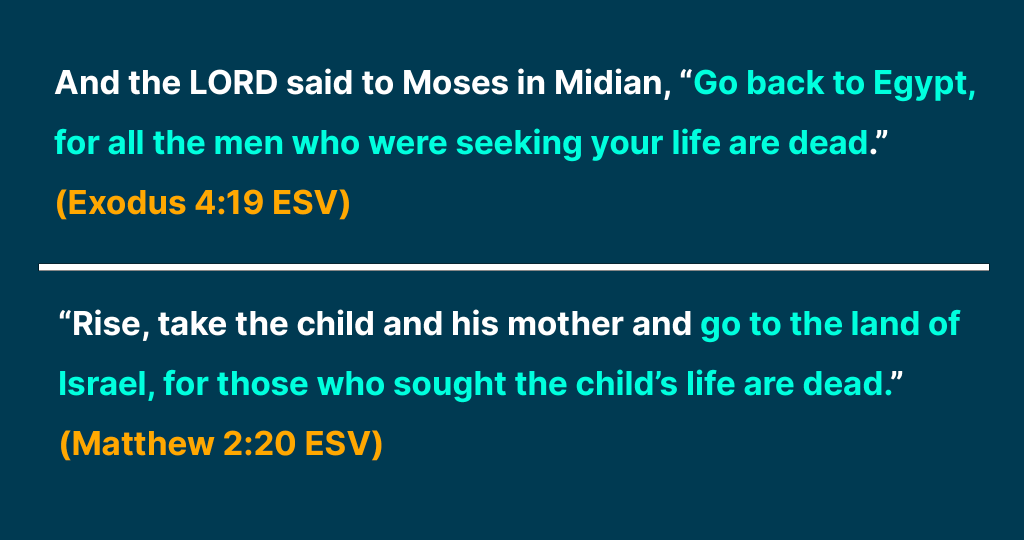 or to paraphrase the words of the Apostle Paul, more broadly, showing how everything that came before was a shadow of what was to come.

And finally, let’s turn to Jesus’ own Hebrew namesake, Joshua.

At last, we come to Jesus or Joshua’s own fulfillment of his Hebrew namesake in the Old Testament. By the way, the name Joshua means the Lord saves, and beginning early in Jesus’ story, he’s given his name because he’s gonna save his people. Now let’s continue on with that pattern of three things looking at three things from the life of the Old Testament Joshua fulfilled in the coming of Jesus.

Those three things begin when Joshua takes over leadership of Israel from Moses, when…

So how does Jesus fulfill these three things? 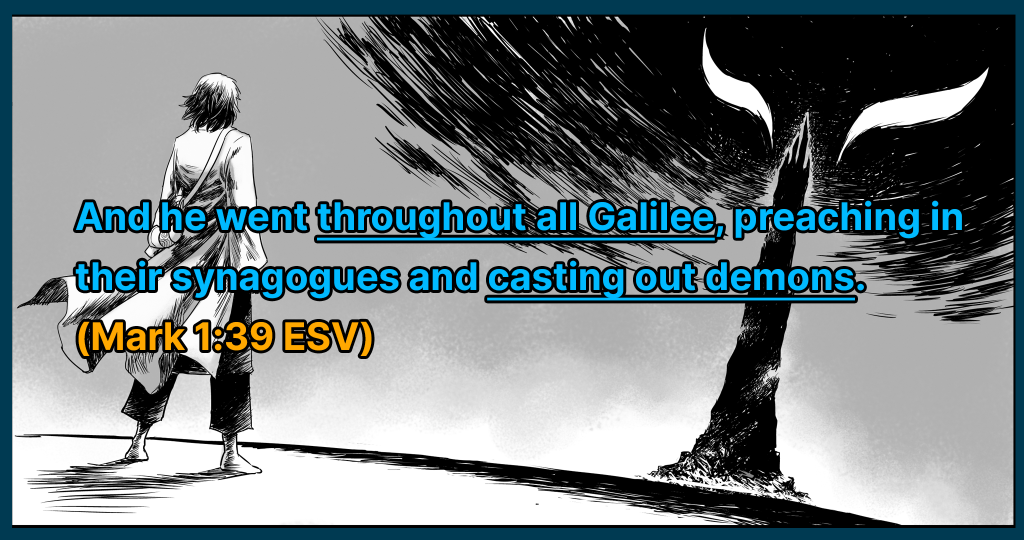 Now I might make another article or video on Jesus Spiritually Reconquering the Promised Land since he also fulfills the life of David in this as well. But here we’re just focused on the Holy Family with the Nativity story.

Now, did you notice that one other incredible thing about how this all happened, how three consecutive generations in Israel’s sacred story are encapsulated in the holy family at the coming of Jesus? Joseph, who moves Israel into Egypt and then the story skips for hundreds of years. Moses, where the story picks up who leads the exodus out of Egypt and into the wilderness. And then Joshua, who takes over leadership after Moses and leads Israel from the wilderness into the promised land.

So what do you think? Have you heard this all before in the telling and the Nativity story each year? If so, please let me know in the comments below. I’d love to hear about it. And if not, maybe help change that by sharing this information with others.

If you’re reading this in December, Merry Christmas and happy Holidays! And if you’d like to dig more into the topic of biblical patterns, you check out more content here or on my related youtube channel. And if this topic is indeed up your alley, I’ll hope to see you in the next one.