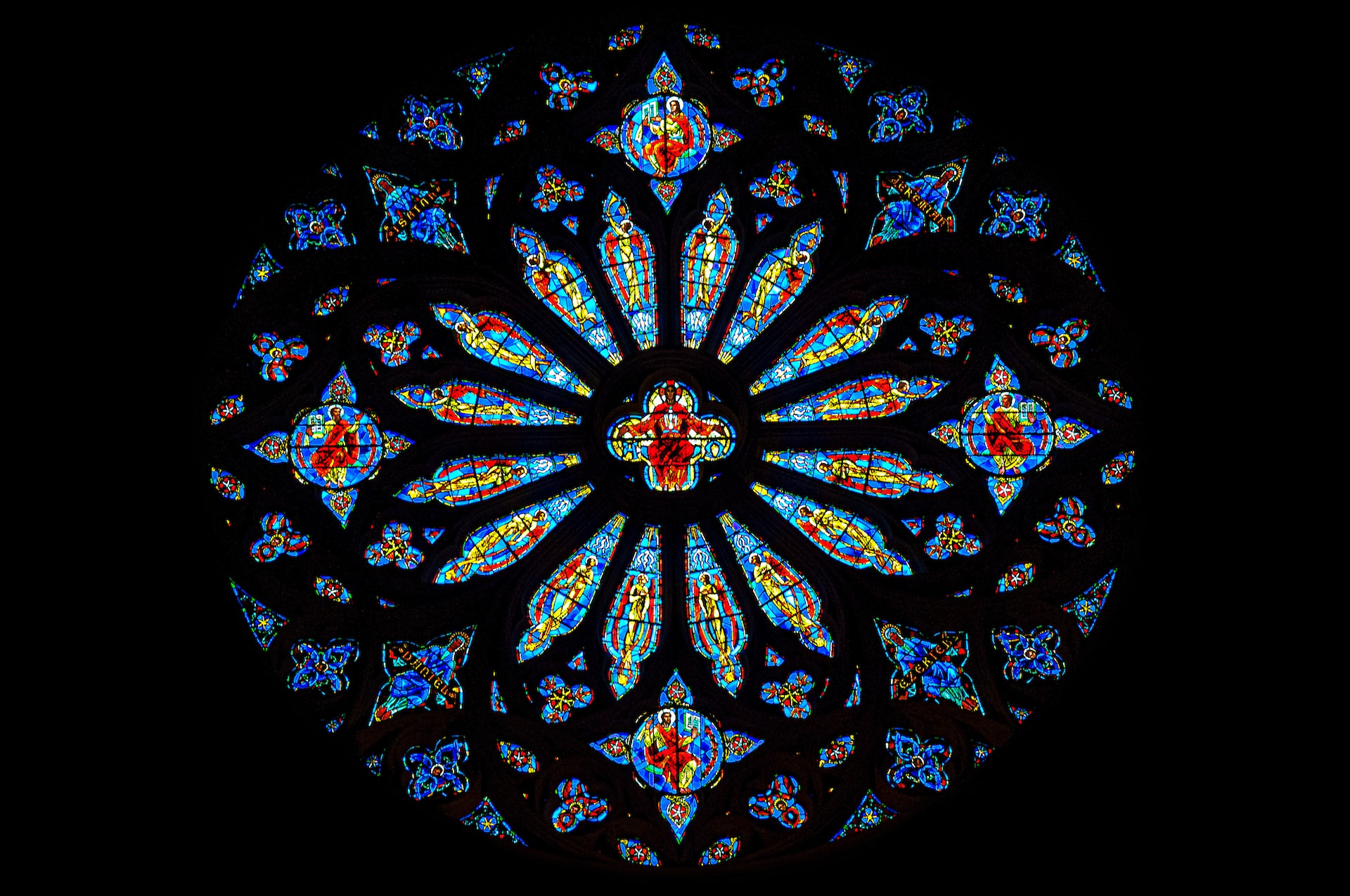 God of Patterns: A Simple Primer

The Bible is no simple book. But a massive collection of texts that sprawl 1,000s of years of person, places and events. How can we even begin to understand such a work?

In my 2.5 decades of studying the Bible, one key to unlocking it as a singular and cohesive narrative has emerged apart from all others: The Bible is a book of patterns. If we can learn to identify and recognize those patterns, and decipher what they mean, we can get a clearer sense of how the Biblical epic comes together as a compellingly meaningful whole.

Let’s start with a simple, clear and still very meaningful example. After Moses leads Israel out of Egypt and delivers the law to them on Mt. Sinai, God tells Moses that he will not lead Israel into the promise land. Instead, that task will fall to his successor, Joshua (Deut. 34:1-10).

So here we have an example of a type of miracle repeating again… a pattern. And with it, a clear meaning for why the pattern is occurring: As the God of Israel was with the prophet that came before, so he is now with the new prophet that has come.

Here, this miracle pattern acts as a sort of divine signature that shows the people that God is again at work in and through someone much like before.

But this pattern goes even further than that. Because later the prophets Elijah and Elisha will repeat this same miraculous water parting miracle at the Jordan river as well. And just as God’s presence with Moses continuing with his successor Joshua was central in the prior event, so Elisha’s repeating the miracle after Elijah will be concerned with the same. (2 Kings 2:6-14).

For after asking for a double portion of Elijah’s spirit at his ascension, Elisha asks the following question…

…before immediately repeating the miraculous parting of the Jordan with Elijah’s cloak himself.

What can we say it means? At a minimum, the original meaning clearly continues: the same God of Israel was present with the prophets Moses, Joshua, Elijah and Elisha alike. But there’s even more to this.

For the above meaning actually fits well into the broader scriptural narrative as a whole: The God of Israel was with Moses, Joshua, Elijah and Elisha alike should remind some of another Scriptural pattern, a related repeating phrase in the Bible as well: The God of “Abraham, Isaac and Jacob.” (Exodus 3:6, 3:15-16, 6:3, 32:13; also quoted in the NT.)

With both these patterns, a broader scriptural implication and meaning are embodied: God’s commitment to relationship with and faithfully working through persons across generations for some greater purpose.

Having sampled the meaning offered from studying biblical patterns, let’s take it one step further by considering the more distinct symbolic meaning of this miracle repeated by Elijah and Elisha next.

Does this mean that Israel’s story was not purposefully repeated in another symbolic sense here though? Recall that with Moses and Joshua, God was liberating his people, pruning the unrighteous in the wilderness and giving them their own land to live his righteous way set apart from the other nations of the world. But here, Israel still lived within its own land… only it was not living the way God intended. So there was no need to physically liberate them to take them into the promise land geographically, but was there another need?

Since both men repeat the miracle of Joshua in particular, it makes sense to focus on how before Joshua parted the waters to lead Israel into the promise land, God first let the unfaithful Israel’s pass away in the wilderness (Numbers 32:13). Elijah and Elisha repeating the miracle of going back into and out of the wilderness in fulfillment of the original events can be seen to be on purpose in regards to moving Israel from a wicked to a righteous people. Such a symbolic meaning is paralleled by their prophetic roles to confront and lead a wicked generation of Israelites back into righteousness living, even while already in the promise land. Elijah’s confronting a wicked king allowed Elisha to support more faithful kings thereafter.

A facet of Israel’s history repeating for purposeful and symbolic reasons here also wouldn’t be the last time. But where as Joshua’s part would be so fulfilled by Elijah and Elisha above, Moses’ part being fulfilled again would have to wait for a future prophet even more like Moses.

More specifically, regarding the people being lead out of Egypt by Moses (from where God called his son Israel) after being taken into Egypt as a family by Joseph, we’d have to wait for Jesus’ infancy as described in the Gospel of Matthew to see that facet of Israel’s history symbolically fulfilled in turn.

Which brings us to a third key takeaway: studying the patterns of the Hebrew bible does more than enhance our sense of its cohesiveness and meaning. It also enhances our ability to see and appreciate the biblical patterns that are fulfilled in the life of Jesus at the climactic conclusion of its narrative.

While we’re considering patterns from the life of Moses and prophets that followed in his footsteps, we have an opportunity to discover another way this pattern is fulfilled in the life of Jesus.

Before God raised up Joshua to be Moses’ successor, Moses prayed that God do it saying “Let the Lord… appoint a man over the congregation… that [they] may not be as sheep that have no shepherd.” (Numbers 27:16-17).

Hold on to that as we’ll return to it in a moment. But first, also consider another miracle of Moses repeated in a different way by Elijah and Elisha.

Jesus’ own food multiplication miracles would connect him to the line of prophets like Moses in multiple ways:

Jesus’ food multiplication miracle both connects him to those who came before but also shows his greatness in contrast to them.

As the people compared David to Saul, “Saul has slayed his thousands and David his tens of thousands!” (1 Samuel 18:8), so they might compare Jesus to Elisha here, “Elisha has miraculously fed his 100 and Jesus his thousands!”

But Jesus miracle does more than reveal him as the greatest human “shepherd” of Israel to come. It also reflects his identity as Israel’s ultimate divine shepherd embodied in human form.

The Lord is my shepherd; I shall not want. He makes me lie down in green pastures. He leads me besides still waters… You prepare a meal before me… My cup runs over. (Psalm 23:1-2, 5 ESV)

If Jesus acts as more than the best human shepherd of Israel but as its ultimate divine Shepherd, it could also tie in with God’s promise in Ezekiel 34, to for a lack of faithful human shepherds, to come and shepherd the people himself.

“As a shepherd seeks out his flock when he is among his sheep… I will feed them with good pasture… There they shall lie down in good grazing land, and on rich pasture they shall feed on the mountains of Israel… I myself will be the shepherd of my sheep, and I myself will make them lie down.” (Ezekiel 34:12-15 ESV)

Jesus didn’t claim to be “a” good shepherd but “the good shepherd” (John 10). Maybe now we have a fuller idea of what that means.

Finally, this example also reveals one final pattern which studying the patterns of Scripture increasingly reveals. It is a pattern seen where the Hebrew scriptures are fulfilled in the life of Jesus in concentrated fashion. Sometimes called “composite fulfillment”, this pattern occurs when multiple thematically-linked OT passages are fulfilled together in a single event or detail in the life of Jesus.

All that said, hopefully these examples have shown well the importance of studying patterns to understanding the Bible.

To review, we’ve explored and discovered how: